The exhibition “Ancient Rhodes – 2400 Years” is displayed in the Grand Master’s Palace. It is a building of the Knights’ period, the ground floor of which belonged to the 7th c. Byzantine Acropolis. In 1856 the Palace together with the neighboring church was demolished by a gunpowder explosion. In its present form it is a reconstruction by the Italian architect M. Mesturino made in 1940. The building was restored in 1988 on the occasion of the EEC Summit Meeting. 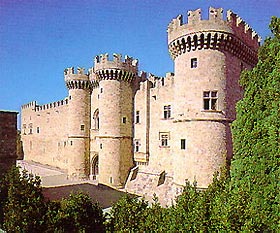 The exhibition, which occupies 12 rooms in the north wing of the Palace, was organized in 1993 to celebrate the 2,400th anniversary of the foundation of the city of Rhodes. It will remain as a permanent exhibition until the new Rhodes Museum is built, which will house the rich collection of the town’s archaeological material spanning the 24 centuries of its history.

The exhibition comprises the following thematic groups:
Objects illustrating the history of Rhodes from the prehistoric period until the settlement in 408/7 BC: vases and figurines from the Minoan site at Trianda, pottery, grave stelai and jewelry from the Geometric and Archaic tombs of Lindos, Kamiros and Ialysos.

Grave relief with a youth offering a cock to a young man (470 BC).

Oinochoe in the Wild Goat style.

A parade of animals arranged in bands covers the whole surface of the vase. From an East Greek workshop (625-600 BC).

Central representation of a mosaic floor (emblem) depicting a personification of New Comedy (ca. 150 BC).

During the school period the Museum organizes programs to familiarize the children with the archaeological material and history of their island.